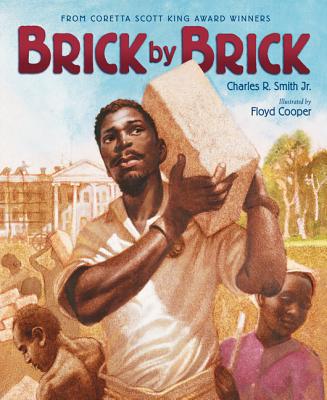 The home of the United States president was built by many hands, including those of slaves, who undertook this amazing achievement long before there were machines to do those same jobs.

Stirring and emotional, Floyd Cooper's stunning illustrations bring to life the faces of those who endured hard, brutal work when the profit of their labor was paid to the master, not the slave. The fact that many were able to purchase their freedom after earning money from learning a trade speaks to the strength of those individuals. They created this iconic emblem of America, brick by brick.

Includes an insightful author's note and a list of selected resources.

Charles R. Smith Jr. is an award-winning author, photographer, and poet with more than thirty books to his credit. His awards include a Coretta Scott King Award for his photographs accompanying the Langston Hughes poem "My People" and a Coretta Scott King Honor for his biography on Muhammad Ali, 12 Rounds to Glory. He is the author of Rimshots, Hoop Kings, Hoop Queens, Tall Tales, Short Takes, Diamond Life, and I Am America. Charles brings his love of basketball and baseball right down to the toddler set in Let's Play Basketball! and Let's Play Baseball! His recent work celebrates subjects he's been interested in since he was a kid, such as The Mighty 12, which honors Greek gods and goddesses. He currently lives in Poughkeepsie, New York, with his wife, Gillian, and their three kids.

Floyd Cooper received a Coretta Scott King Award for his illustrations in The Blacker the Berry and a Coretta Scott King Honor for Brown Honey in Broomwheat Tea and I Have Heard of a Land. Born and raised in Tulsa, Oklahoma, Mr. Cooper received a degree in fine arts from the University of Oklahoma and, after graduating, worked as an artist for a major greeting card company. His many beloved books form a lasting legacy.