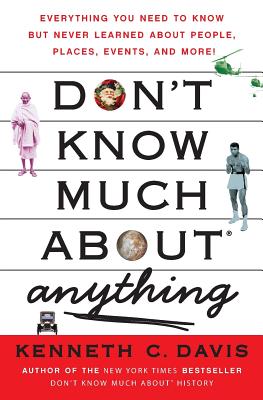 In his wildly entertaining, winningly irreverent, New York Times bestselling Don't Know Much About® series, author Kenneth C. Davis has amused and edified us with fascinating facts about history, mythology, the Bible, the universe, geography, and the Civil War.

Now, the sky's the limit in his latest irresistible installment—a grand tour of knowledge that carries us from the Great Smoky Mountains to the Berlin Wall, from the Salem Witch Trials to Watergate, from Michelangelo to Houdini. Brimming with busted myths, gripping true stories, and peculiar particulars about a plethora of people, places, and events, this captivating compendium is guaranteed to delight information lovers everywhere as it feeds our insatiable appetite to know everything!

Kenneth C. Davis is the New York Times bestselling author of A Nation Rising; America's Hidden History; and Don't Know Much About® History, which spent thirty-five consecutive weeks on the New York Times bestseller list, sold more than 1.7 million copies, and gave rise to his phenomenal Don't Know Much About® series for adults and children. A resident of New York City and Dorset, Vermont, Davis frequently appears on national television and radio and has been a commentator on NPR's All Things Considered. He blogs regularly at www.dontknowmuch.com.