Under Pressure: Rescuing Our Children from the Culture of Hyper-Parenting (Hardcover) 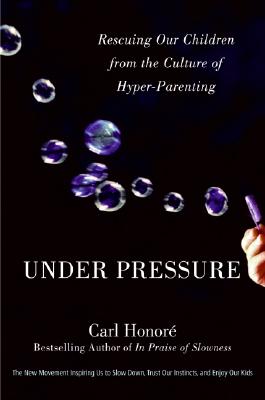 By Carl Honore
Email or call for price.
Special Order

"Why do grown-ups have to take over everything?" This innocent question from acclaimed journalist and international bestselling author Carl Honoré’s son sparked a two-year investigation into how our culture of speed, efficiency, and success at all costs is damaging both parents and children. When the impulse to give children the best of everything runs rampant, parents, schools, communities, and corporations unwittingly combine forces to create over-scheduled, over-stimulated, and overindulged kids. The mere mention of potty-training, ballet classes, preschool, ADD, or overeating is enough to spark a heated debate about the right way to raise our children. The problem is that despite the best intentions of all involved, the pressure to manage every detail of our children’s lives from in utero through college is overwhelming.

Delivering much more than a wake-up call, international bestselling author Carl Honoré interviews experts in Europe, North America, and the Far East, talks to families around the world and sifts through the latest scientific research. Not only do we see the real dangers of micromanaging children, but Honoré also shows us an emerging new movement inspiring many to slow down and find the natural balance between too little and too much. Blending the finest reportage, intellectual inquiry, and extraordinary true stories, Under Pressure is the first book to challenge the status quo by mapping out an alternative to the culture of hyperparenting that is presently pushing children and their parents to the brink.

Carl Honore is an award-winning journalist and author whose revolutionary first book, In Praise of Slowness, was an international bestseller and has been published in more than thirty languages. Honoré is a highly sought after lecturer who speaks around the world on slow living and the Slow Movement, and his work has appeared in publications including The Economist, Observer, The Guardian, The Miami Herald, Houston Chronicle, TIME magazine, and National Post. Honore lives in London with his wife and their two children.

“...a must-read book for parents, educators and all concerned with the health and well-being of America’s children.”
— Madeline Levine, Ph.D., author of The Price of Privilege

“Under Pressure is a Godsend! Full of common sense advice...”
— Christiane Northrup, M.D., author of The Wisdom of Menopause

“Honoré presents a list of ways in which parents all over the developed world have long been robbing their children of their childhoods by inserting themselves into every facet of their children’s lives. . . . Joining a crowded field of child-rearing books, this is an excellent choice.”
— Library Journal

“...an important new look at the evolution of child rearing among the global middle class. Honore’s final words to parents are comforting: Trust your instincts and let your children be children. There’s time enough for all that achievement later.”
— Oregonian