Forbidden Faith: The Gnostic Legacy from the Gospels to The Da Vinci Code (Hardcover) 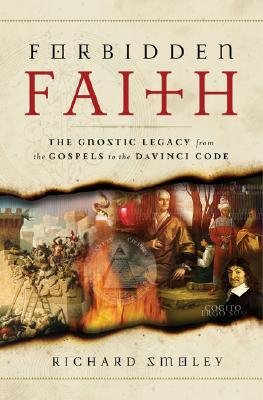 Who were the Gnostics? Were they heretics, or were they ancient visionaries who possessed the keys to the deepest secrets of Christianity? Where did they come from? Did they leave any descendants? Why were they suppressed by the early Church? And why do their ideas keep reappearing throughout history? Forbidden Faith is the first comprehensive popular history of Gnosticism, a secretive tradition that has survived for centuries in many forms and under many names.

Richard Smoley, an expert in esoteric Christianity, traces the Gnostic legacy from its ancient roots in the Gospel of Thomas, discovered in Egypt; early second-century Gnostic communities of the Roman Empire; and the Manichaeans of Central Asia. He tracks how the Gnostic impulse was publicly repressed but survived underground in various forms of Christianity, surfacing again in the Middle Ages with the Cathars, a mysterious group of heretics who inspired the medieval tradition of courtly love but were then wiped out by the Inquisition. Since then, Smoley reveals, the Gnostic legacy has survived into the modern era with the help of Jewish Kabbalists, the Freemasonry of our founding fathers, the poetry of William Blake, the intuitive insights of nineteenth-century American Theosophists, and the psychological works of Carl Jung. Finally, we learn how some of the key teachings of the Gnostics are being revived today in serious nonfiction such as the criticism of Harold Bloom, in the science fiction of Philip K. Dick, as well as in popular Hollywood films like The Matrix and The Da Vinci Code.

Why should Gnosticism exercise such a peculiar and lasting fascination? Throughout most of Christian history, Gnosticism was the "forbidden faith," and such condemnation by the official Church might actually have served to endow the movement with glamour. But that explanation goes only so far. For the Gnostics to have such lasting appeal, it seems logical that they must offer solutions to some problems, solutions overlooked by mainstream religion. Forbidden Faith provides the enduring story and continuing legacy of those errant faithful who have had direct experiences of the divine that can't be explained by the official beliefs of the Church.

Richard Smoley was educated at Harvard and Oxford universities and was the editor of Gnosis, the award-winning journal of Western spiritual traditions. He is the co-author (with Jay Kinney) of Hidden Wisdom: A Guide to the Western Inner Traditions, and is the author of Inner Christianity: A Guide to the Esoteric Tradition and The Essential Nostradamus.

“A compelling and accessible argument. A thoroughly enjoyable read; highly recommended for all libraries with strong religious collections.”
— Library Journal

“If you are interested in the appeal of these popular manifestations of Gnosticism, Smoley is certainly your best guide.”
— Spirituality and Health magazine