Flawless Execution: Use the Techniques and Systems of America's Fighter Pilots to Perform at Your Peak and Win the Battles of the Business World (Hardcover) 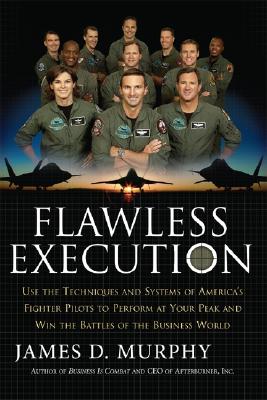 From the former F-15 fighter pilot and CEO of one of
Inc.'s 500 fastest-growing companies: a
hard-hitting primer on performance excellence
in the workplace -- military style

According to former U.S. Air Force pilot-turned-management guru James D. Murphy, businesses need to take a lesson from the American military's fighter pilots. While F-15s, F-16s, and F/A-18s are the ultimate aerial combat machines, they are entirely dependent on the men and women who fly and maintain them. At Mach 2, the instrument panel is screaming out information, the horizon is a blur, the wingman is occupied, the pilot's busy, the jet is hanging on the edge -- and yet fighter pilots routinely handle the stress. It's not much different in today's fast-paced, unforgiving world of business. One slipup and the company is bankrupt before the employees know what hit them.

What works on the squadron level for F-15 pilots will also work for your marketing team, sales force, or research and development group. By analyzing the work environment and attacking its centers of gravity in parallel, you'll begin to utilize the Plan-Brief-Execute-Debrief-Win cycle that makes up Flawless Execution. The result will make a rapid impact on your business's future success. Developed over the course of nearly fifty years, the rigorous practice of Flawless Execution has helped U.S. fighter squadrons reduce their mistake rate, cut casualties and losses of equipment, and rack up an envious victory record. Through Afterburner's multimedia seminars conducted by "Murph" and his fellow pilots-turned-businesspeople, businesses have benefited by adopting the techniques, systems and strategies of America's Top Guns. Now, with Flawless Execution, you can too.

James D. Murphy is the CEO of Afterburner, Inc., a consulting firm he founded in 1996 after four years in sales management and eight years as an F-15 fighter pilot. Murphy is also the author of Business Is Combat, and lives in Atlanta, Georgia.