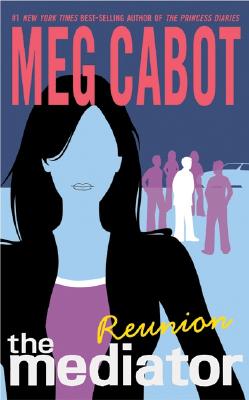 This is book number 3 in the Mediator series.

Reunion is the third book in the thrilling, romantic Mediator series, from the New York Times bestselling author of the Princess Diaries, Meg Cabot.

The RLS Angels are out for blood, and only Suze can stop them—since she's the only one who can see them. The four ghostly teenagers died in a terrible car accident, for which they blame Suze's classmate Michael...and they'll stop at nothing until he's joined them in the realm of the dead.

As Suze desperately fends off each attempt on Michael's life, she finds she can relate to the Angels' fury. Because their deaths turn out not to have been accidental at all. And their killer is only too willing to strike again.