The Miracles of Exodus: A Scientist's Discovery of the Extraordinary Natural Causes of the Biblical Stories (Paperback) 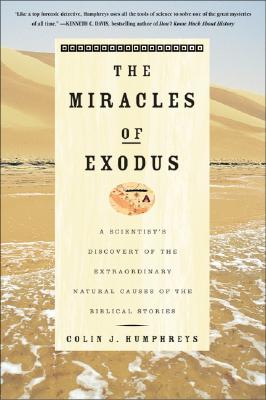 By Colin Humphreys
$16.99
Email or call for price.

The Real Story of the Exodus

Colin Humphreys, a world-renowned Cambridge University scientist, reveals for the first time the concrete, scientific truth behind the Exodus miracles.

Colin Humpreys is a renowned Cambridge University physicist who has received considerable publicity for his ideas and research, which span many fields from computer chips to microprinting, eternal lightbulbs, and computer chips in the brain. His passion for more than 20 years has been examining the Bible in the light of science, and he is expert not only in physics but chemistry, astronomy, and geology. He is president of the Institute of Materials and Goldsmiths' Professor of Materials Science and head of the Rolls Royce University Technology Centre at Cambridge University, and chair of Christians in Science for the United Kingdom. He was recently honored by the Queen with the title of Commander, Order of the British Empire, for services to science research and communication.

“A simply fascinating, and extremely readable, study of the Israelites in Egypt and on the desert way to Sinai.”
— Professor Robert Gordon, Regius Professor of Hebrew, Cambridge University

“A strikingly novel interpretation of the Exodus story that will interest many students of the Bible.”
— Rev. Dr. John Polkinghorne, Templeton Prize winner, and author of Belief in God in an Age of Science

“This book will re-open the question of what happened when the Hebrews left Egypt for the Promised Land.”
— John Ray, Professor of Egyptology, University of Cambridge